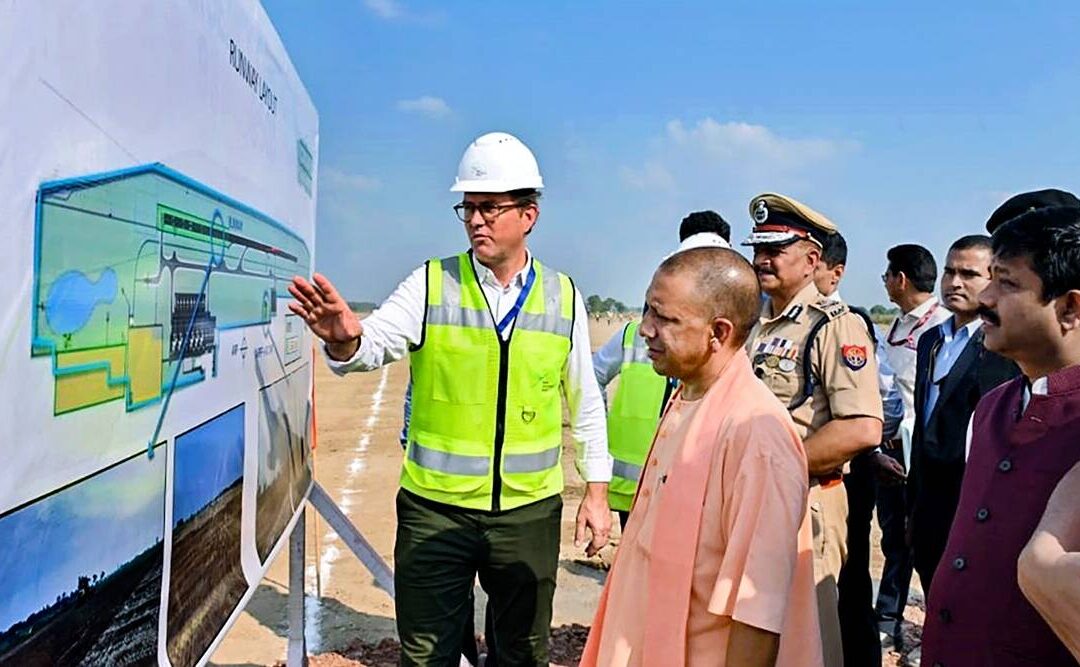 The construction plan for the airport is laid out in two stages, wherein the first stage has four phases. In the first phase, the Noida International Airport will have the capacity to handle 12 million passengers annually with one runway and 25 aircraft stands.

“UP Chief Minister Yogi Adityanath visited the airport site Sunday and took stock of the current status of construction in stage 1. For stage 1, around 1,334 hectares of land was fully acquired in 2020. The terminal building and one of the runways has been constructed. As of now, construction of boundary wall is complete at 93%. Construction of the ATC building is ongoing as well as the second runway, which will be ready by 2023. The runway is 4-km-long and is being constructed from both sides,” Singh said.

Residents of six villages including Ranhera, Rohi, Nangla Shareefkha, Nangla Cheetar were shifted to and provided land in Jewar Bangar township with around 3,025 plots, he added. “The process of acquisition of 1,365 hectares in stage 2 has started. This includes construction of one runway, an aviation hub and an MRO facility. As per provisions under the land acquisition act, consent of 70% of affected families is required for land acquired for private-public projects,” he said.

The construction plan for the airport is laid out in two stages, wherein the first stage has four phases. In the first phase, the Noida International Airport will have the capacity to handle 12 million passengers annually with one runway and 25 aircraft stands. In the second, third and fourth phases, passenger capacity is expected to stand at 30 million, 50 million and 70 million respectively. “Project cost for phase 1 stands at Rs 4,599 crore, whereas for the entire stage 1, it is around Rs 30,000 crore,” he added.

According to Singh, certain key steps have been taken keeping protection of trees, indigenous birds and animals in mind. “Environmental clearance from the Ministry of Environment, Forest and Climate Change for Noida International Airport was received by March 9, 2020. The forest department granted (permission for) felling 11,460 trees. As on date, 5,620 (trees) have been cut in areas delegated to terminal zone, runway boundary and runway zone. As of August 2022, we have planted around 1,14,560 trees in 56 hectares, which is 10% more than the trees that were felled. Further, 93 plants have been transplanted towards the boundary wall area. Around 14 ponds comprising a total area of 3 hectares were found in the 1,364-hectare land acquired in stage 1. In their place, we have constructed a pond comprising a total area of 6.8 hectares… in Jewar.”

Singh said that for granting environmental clearance, a study was carried out by Wildlife Institute of India which raised two concerns — protection of the Saras crane, which is also the state bird, and the black buck.

An NOC has been granted for declaring a water body in Dhanauri as a wetland, which will be used for protection of birds including Saras. It was granted on August 24 by Yamuna Expressway Industrial Develop-ment Authority (YEIDA), Singh said. The area occupied by the wetland has been increased from 66.54 hectares to 112.89 hectares, which will include a buffer zone along with the body. Additionally, a conservation fund will be created with seed money of Rs 5 crore provided by YEIDA.